2020 has been a trying year, to put it gently. With a global pandemic, an economic recession, widespread civil unrest—all during a very divisive election season—there has been a lot on our minds. This year has shown all of us—in one way or another—the cracks and gaps in our system, leading to important conversations about how race, class, sex, gender, sexual orientation, ability, etc. impacts privilege and access to important resources. In light of this, marketers should be turning their focus to making their brand messaging more inclusive. But with so much changing, it’s hard to know where to start.

What Is Inclusive Language?

Inclusive language is word use that avoids ostracizing, offending, or excluding anyone based on race, gender identity, sexual orientation, ability or disability, socioeconomic class, religion, or age. In short, it’s language that’s meant to include the greatest number of people.

Why Should You Use Inclusive Language?

Language changes frequently to acknowledge and remember the experiences of the communities we’re referring to, so it’s important, when writing your brand and marketing messaging, to do your research.

Just like it’s important to build accessible websites so as to make your site usable for the largest audience possible, it’s important to use inclusive language so as not to unnecessarily exclude anyone with your message. Intentionally or unintentionally, neglecting to use inclusive language can turn away potential customers or clients. Your messaging could paint the picture that your product or service isn’t for them.

But the importance of inclusive language doesn’t begin and end with helping secure more leads or customers. Lack of inclusivity in your marketing reflects negatively on your brand and company values as well, affecting your current and future employees, competitors, and the greater community’s perception of your brand—which will outlast your marketing campaign messaging.

So, where do you start? Inclusive language can be daunting if it’s something you haven’t prioritized as a company previously, but the important thing to remember is that once you have awareness of it, it gets easier and easier to keep track of. Generally, here are the inclusivity markers to keep an eye out for:

Spoiler alert: what you learned in grade school about how to use pronouns in a sentence has probably changed. Historically, it was acceptable to use he/she, he or she, or just he as the all-encompassing pronoun to refer to people of all genders. But, with the growing awareness of transgender (not identifying with the gender you were assigned at birth) and non-binary (not identifying as just male or just female) folks, using “he or she” or “he/she” as the all encompassing pronoun no longer suffices.

A quick way to make your online presence more inclusive is to include your pronouns in your email signature and your social media profiles, even if you identify with the gender you were assigned at birth.

Any time you’re writing marketing messaging with pronouns, make sure the pronouns are the most inclusive they could be. Common examples of this oversight are:

A big perpetrator of this is advertisements for jewelers. They usually operate under the assumption that their target customer is a man buying an engagement ring to propose to a woman.

Example: “Fellas, get her the ring she’s dreamed of all her life.”

“Get them the ring they’ve dreamed of all their life.”

This now applies to anyone in a relationship looking to pop the question—not just men proposing to women.

To be the most inclusive of all genders, they/their or removing the use of a pronoun is most preferred. Similarly to how you’d speak in normal conversation, they/their can be used as a singular pronoun without violating grammatical rules.

If you’re referring to someone specifically in your messaging and you’re not sure what gender they identify with, it’s okay to ask! Simply asking “what pronouns do you use?” will allow you to honor their gender identity in your messaging.

Tip: a quick way to make your online presence more inclusive is to include your pronouns in your email signature and your social media profiles, even if you identify with the gender you were assigned at birth. If introducing yourself with your pronouns and including them in your online presence is limited to only transgender, nonbinary, and gender-nonconforming people, they’re forced to “out” themselves to anyone viewing their LinkedIn, for example. When more people—cisgender people included—share their pronouns, it normalized it, and the stigma around sharing them dissipates.

The way communities like to refer to themselves is always evolving, and there isn’t always consensus on it even within those communities. For instance, American Indian and Native American are both accepted terms for Indigenous people in America, but folks might have a preference on how they identify themselves. Additionally, Hispanic and Latina/Latino/Latinx are often used interchangeably, but have slight variation in meaning.

The way communities like to refer to themselves is always evolving, and there isn’t always consensus on it even within those communities.

When referring to a race and that community’s general experience, (for example, the Black community and the Black Lives Matter movement) refer to the most all-encompassing term you can. If you’re referring to an individual or specific group of people, it’s important to ask which term they prefer. For instance, there are a lot of reasons why someone might not identify as African-American and prefer to be called Black, such as not identifying with African heritage, culture, or customs, or just personal preference. This is similar to the fact white Americans likely don’t identify with their ancestry unless their parents or grandparents are first-generation immigrants.

When referring to all people of color generally, the relatively new term that’s most inclusive is BIPOC (pronounced “buy-pock”), or Black, Indigenous, and people of color, that became more widely used in May 2020 in light of events surrounding George Floyd’s death to unite people of color while acknowledging the different, and often more violent, form of oppression inflicted on Black and Indigenous people.

Language changes frequently to acknowledge and remember the experiences of the communities we’re referring to, so it’s important, when writing your brand and marketing messaging, to do your research—the resources listed below are a great place to start!—and make sure the term that was most inclusive five years ago is still the most inclusive today.

There are so many gendered words that are commonly used in our everyday lives that we don’t even notice it. For example, try talking about your weekend without using any gendered terms. If you tell a story about going out to dinner with your spouse where you were served by a female waiter, you likely tripped over your words and had to think twice before finishing your sentence.

Because they’re so common in our everyday conversations, you need to pay extra attention to gendered words. Common examples are actress vs. actor, congressman vs. legislator or representative, freshman vs. first-year student, or simply using “guys” when referring to a group of people. Brush up on gendered terms (maybe your team has a live Google doc to collect gendered nouns as you come across them) to make sure you’re finding the gender neutral alternative every time.

Outdated terms for disability are so deeply ingrained in our language that it’s difficult to even catch them. Words like crazy, nuts, or lame have all been used to negatively refer to folks with physical and mental disabilities. Additionally, phrases like wheelchair-bound or handicapped are outdated terms that cast pity and shame on people with physical disabilities. Terms related to disability are changing frequently, so it’s important to always be checking in and ensuring you’re using the most up-to-date terms.

A Note About Person-First vs. Identity-First Language

Being right all the time is impossible, especially when language is constantly changing. Just like popular slang terms in the ‘90s and early ‘00s are wildly outdated and awkward to say now, the widely accepted way to refer to marginalized communities has changed—sometimes drastically—even in the last year. The best thing to do is to always be double-checking, get comfortable with asking questions—and give yourself grace when you make mistakes! It’s better to ask the question than it is to assume and instantly exclude and potentially offend an entire group of people. Inclusive language in marketing messaging goes beyond political preference—it’s about ensuring your message reaches the most people and resonates with them exactly how you intended. 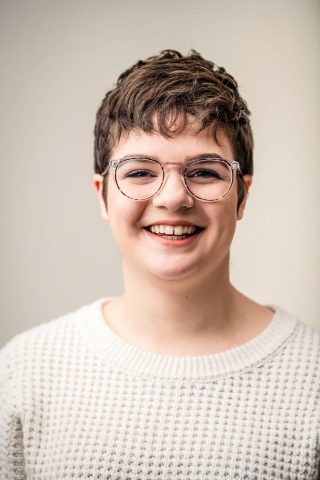 Nora's appreciation of good storytelling leaks not only into her work at Olive, but also her love for music and food that's too good for words. When she isn't working hard on the Olive blog, you can find Nora geeking out about keyword research and SEO.
Follow this author: Twitter LinkedIn

What is Modern Marketing?
How To Build Brand Advocates
6 Keys for Writing Better Creative Briefs