Is Facebook Still An Effective Marketing Tool for Higher Education?

It’s tough to find a company these days that doesn’t have a social media presence. From Instagram to Facebook to Twitter and beyond, the advertising potential is practically limitless for colleges and universities willing to work at it.

When it comes to higher education, marketing and advertising is becoming more and more important as colleges and universities continue to fight for a shrinking pool of prospective students. In fact, figuring out how to attract, entice, and engage with their target audiences is absolutely essential for higher ed institutions. That means using social media to tell the school’s story and position it in the best possible light—and Facebook remains the frontrunner.

Gen Z comprises 25 percent of the total U.S. population, making them a larger cohort than baby boomers or millennials, according to Forbes. In fact, it is projected Gen Z will make up 40 percent of the consumer population by 2020. Figuring out how to engage this generation will have a huge impact on the future of higher ed marketing.

Gen Z’ers are savvy and selective. If you’re not credible, they won’t waste their 8-sec. attention span on you.

Generation Z—the world’s up-and-coming college student population—doesn’t remember life before technology, so it’s safe to say that a huge portion of their day is spent looking at their devices, primarily their mobile phones. They’re used to online ads, and they know that their attention has value. They want answers to their questions, and if an ad makes them jump through too many hoops to find them, Gen Z’ers will simply move on. They’re digital natives, which means they’re savvy and selective, so if you don’t come across as genuine and credible, Gen Z’ers won’t waste their 8-second attention span on you.

Millennials surpassed baby boomers in 2016 as the largest living generation, according to the U.S. Census Bureau. But that number-one ranking has its drawbacks. The average student loan debt doubled between the millennial generation and Generation X. Moreover, millennials are earning, on average, 20 percent less than their parents did at the same age.

Marketing to this generation is about offering value. They’re on Facebook in droves—30 percent of all users!—and they were the early adopters of online classes. If your school is going to attract millennial career-changers or adult students, focus on offering modalities that let them go at their own pace and control their own academic destiny.

The parents of Gen Z are another matter entirely. Generation X (born 1967-82) is raising Gen Z, and as busy parents, they’re individualistic and short on time and patience. Marketing to them is about offering rewards: think coupons, do-good brands, sweepstakes, and giveaways. They’re certainly Facebook savvy, but are also early adopters of the work hard/play hard mentality so they spend less time online.

Also keep in mind, Gen Xers were conditioned by their baby boomer parents to believe that, after high school, a four-year degree was the next logical step in career planning. They found out quickly that those traditional four-year degrees they so responsibly sought, come with significant debt. So, they’re teaching their kids to be flexible when it comes to weighing academic options.

As tuition costs rise and more degree options become available, students of all generations are looking for cost-effective means to earn the skills they need. So, as you consider Facebook as an advertising platform for your school, it’s important to remember these different audiences, understand their online behaviors, and meet their expectations.

So, is Facebook still a thing? In short—absolutely. As of March 2017, Facebook saw an average of 2 billion users per month, which is an 18 percent increase year over year. While their method may vary, Gen Z, millennials, and Gen X are using Facebook in record numbers, which means your ads are being seen.

Facebook has an incredible algorithm for showcasing ad information, and its marketing tools are pretty slick. Not only that, but Instagram is owned by Facebook, and the two advertising platforms integrate into one another almost seamlessly. If you’re creating ads on Facebook, there’s an option to automatically share them with Instagram’s 600 million monthly active users too (as long as you have an account set up). With this two-for-one deal and its relevance across generations, it’s clear that advertising on Facebook is well worth your time.

If you’re new to advertising on social media and aren’t sure where to start, there are plenty of tutorials you can access simply by searching “how to advertise on Facebook.” Hootsuite and HubSpot are great places to start, as they walk you through the process step by step and show you how to advertise effectively given your brand.

Get Out There and Advertise

Social media is constantly shifting and evolving. Today’s hot new platform is tomorrow’s My Space or Friendster. And while reaching prospective students via social media has proven to be a challenge for higher ed institutions, rest assured, Facebook is here to stay. It’s too big and too influential to be counted out.

Now is more important than ever for colleges and universities to make their presence known on Facebook. It’s also worthwhile to give some of the other social media platforms a glance and see what you can work into future marketing campaigns.

Getting the word out about your school has never been easier—or harder—than it is today. With a million different avenues for communicating your message, it’s easy for your brand to get lost in the shuffle. Make sure you understand your target audience and the different needs, motivations, pain points, and challenges across each segment. 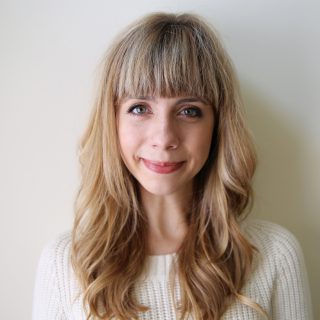 As Minnesota-based freelance writer and editor, crafting emotion, instilling visuals, and giving the reader an awareness of brand and story is Lauren's goal. She's always liked absorbing voice and casting influence, and it’s her goal to do the world's stories justice. Whatever it is that needs to be said, she wants to be the one to say it.
Follow this author: LinkedIn Website

What Is Geoframing, and How Is It Different From Geofencing?

5 Key Questions to Answer Before Starting a Digital Marketing Program

5 Tips For Developing an Authentic Brand Voice on Social Media